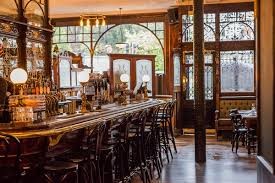 Great Northern Railway Tavern: Bar stools back on the menu

I had the privilege of being asked my views last year on what elements I’d like to incorporate into my local pub. London brewer Fuller’s had recently acquired a lovely Victorian boozer, The Great Northern Railway Tavern, which it intended to restore to its former glory.

Rather than rushing into anything, Fuller’s sensibly canvassed some local opinion before committing any investment. The two key essential items I suggested were a great beer list and bar stools – not necessarily in that order. My children recommended I also propose free ice cream at all times, which I also put forward.

My bar stool suggestion not only highlighted my love affair with this humble piece of furniture but was also a fight-back against previous managers of the pub, who removed all stools from the bar for a time. Their reasoning was to dissuade people from crowding around the bar. This mirrored the strategy town centre bars brought into force to avoid so-called “vertical drinking”. I can understand it in circuit pubs in city centres but it seemed a rather bizarre decision in a local boozer in a north London “suburb”.

Thankfully, Fuller’s reintroduced bar stools – along with a super, rotating selection of beer – although my children were disappointed by the lack of free ice cream. My view is that the beating heart of a pub is found at the bar and, space permitting, where I invariably gravitate – perched on a stool. It’s where the action is and it’s the buzz around the bar which gives any pub the energy that permeates throughout the premises. I suspect we take this for granted in the UK because it’s one of the things tourists comment on when visiting this country.

For customers of Charles Wells’ chain of 12 “British” pubs that are expanding across France, one of the appealing aspects of the venues has been the requirement for customers to visit the bar when they want to buy a drink. This is in contrast to the French tradition of orders being taken at the tables. This British system sucks people to the bar and enables much more interaction among the customers, who invariably find they congregate around this central point. This has found particular appeal among young French drinkers.

As a bar stool advocate it has been interesting to see the move by restaurateurs to incorporate counter seating into their dining rooms. I’d say pretty much any new opening now includes some such seats – more often than not positioned around an open kitchen. This move has been driven by a number of factors including the need to squeeze more covers into venues to counter the increased cost of running restaurants.

Such seating also suits solo dining much better because the customer can focus on the action behind the counter and from an economic point of view because they don’t take up a whole table. It also chimes well with the move towards more casual dining because even in the smartest restaurants, it feels rather louche to be perched on a bar stool.

I’ve had some of my more enjoyable meals out this year dining at the counter. Stools in Spanish restaurant Rambla in Soho puts you right at the heart of the action as chefs work away creating magical dishes. The stools also put you over the top of everybody else in the compact room, giving great visibility. 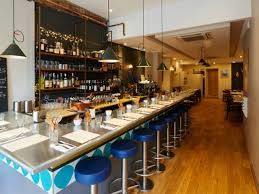 It’s the same story at another of my local restaurants, Irvin Bar Grill, which successfully mixes Italian and Scottish cuisine and drinks – but I only visit if I can grab a couple of stools at the pewter-topped counter. The more relaxed nature of its bar-counter seating means an evening intended as “drinks only” can seamlessly morph into a procession of small plates for dinner in a way that wouldn’t be possible at the tables in this tiny venue.

Being a bar fly in Irwin also affords an opportunity to chat with the owner, who works behind the bar, and to people-watch as the restaurant entrance is alongside the bar. These things combine to make you feel you are in the thick of things. It’s safe to say my love affair with the bar stool continues but it now has some competition from the newcomer in town – the restaurant stool.

This piece was originally published on Propel Info where Glynn Davis writes a regular Friday opinion piece. Retail Insider would like to thank Propel for allowing the reproduction of this column.